Dozens gathered outside the Broadway Theatre to protest the casting of Amar Ramasar in "West Side Story" while he faces sexual harassment allegations.

Alexandra Waterbury, GS ’21, brought forward allegations of sexual harassment against New York City Ballet dancer Amar Ramasar in September 2018. Despite the ongoing court battle, Ramasar was cast in Broadway’s edgy revival of “West Side Story” as Bernardo, one of the central roles. On Thursday night, dozens of protesters gathered on the sidewalk in front of Broadway Theatre before the opening performance to protest his casting.

Waterbury—a former member of the School of American Ballet, an academy affiliated with NYCB—sued the ballet company and ex-boyfriend Chase Finlay for exchanging sexually explicit photos of her and other women in the company with other male members within their cohort, including Ramasar.

Following these allegations, NYCB fired Ramasar that same month after his debut in the musical “Carousel.” Shortly thereafter, following counseling and temporary time with New York City-based ballet company BalletNext, Ramasar was reinstated in April 2019 by NYCB. An arbitrator found NYCB’s termination of Ramasar to be too severe of a punishment, but agreed that suspension was justifiable.

“I think we’ve all held on to so much frustration for so long about male behavior in the workplace, and I think finally the last three years we’ve allowed that anger and frustration to come out,” Kelley Heyer, an actor and activist living in New York City who attended the protest, said. “This protest is us continuing to take up space and make sure our voice is heard.”

On Jan. 21, both Waterbury and Ramasar were called to court in regard to the defendants’ motion to dismiss the case. Both parties await the judge’s decision, which is expected to come within 60 days of their court appearance.

Tonight’s protest attracted nearly 100 protesters, many of whom identified as artists in the industry. Among them were two young women who initiated the protests and petitioned for Ramasar’s removal: Megan Rabin and Paige Levy.

Rabin, a sophomore at Northeastern University, started the Change.org petition “Get Amar Ramasar Off The Stage,” which has nearly 50,000 signatures, in the hope of persuading renowned Belgian director Ivo van Hove, producer Scott Rudin, and the rest of the “West Side Story” team to use their positions of power to remove Ramasar.

“A lot of people don’t know anything about it and are very curious,” she said. “[They’re] super surprised that they hadn’t heard more about it.” 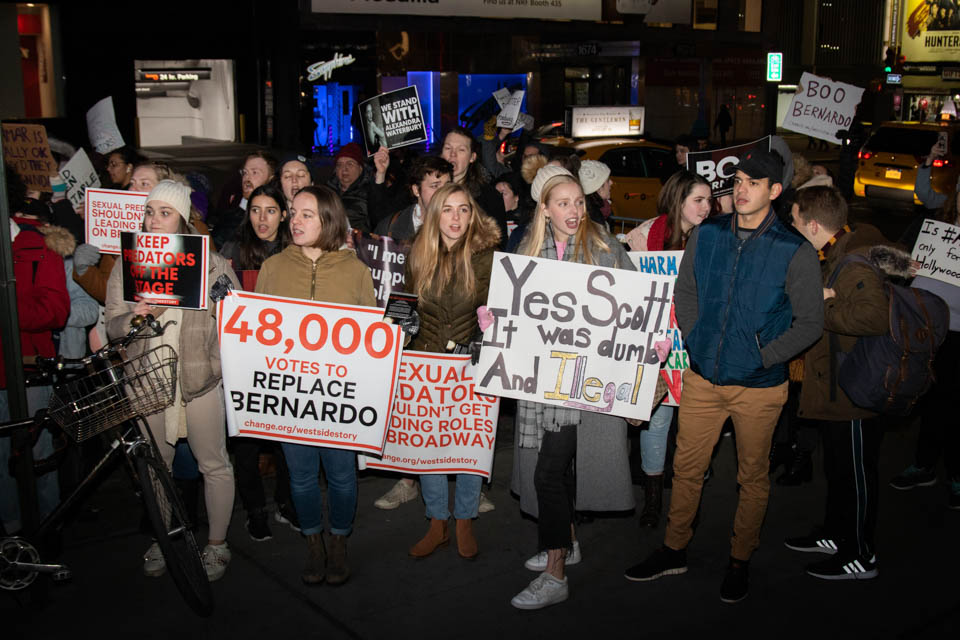 Levy, a senior at LaGuardia High School of Music & Art and Performing Arts, had just seen Ramasar perform in “Carousel” before the allegations were announced. As a young performer who plans on pursuing a degree in acting, Levy was immediately driven to protest Ramasar’s casting in “West Side Story.”

“It’s become a rallying point for so many people who have faced injustice in theater, in ballet, in any performing industry or not, to realize that they have a voice and they can affect change,” Levy said. “Even if he hasn't been removed yet—or maybe he won’t ever be removed—we have started a conversation that they can’t quiet … There’s no going back from this.”

“We passed out hundreds of info cards each week to everyone,” she said. “A lot of people have been really supportive about what we're doing. Some people have expressed that they wished they had known about [Waterbury’s allegations] beforehand, otherwise they wouldn't have bought tickets.”

Protestor and performer Hannah Provisor, who was taking part in her fourth protest of the “West Side Story” casting choice, noted the importance of the opening night performance.

“This is leaving a permanent stain on the show, and obviously I feel for the rest of the cast, but the producers and the people with the money who are keeping him in the show need to know, and they'll never be able to look back on this night without this in the background,” Provisor said. “Like Alexandra says, we have to set the precedent that when you harm women, there are consequences." 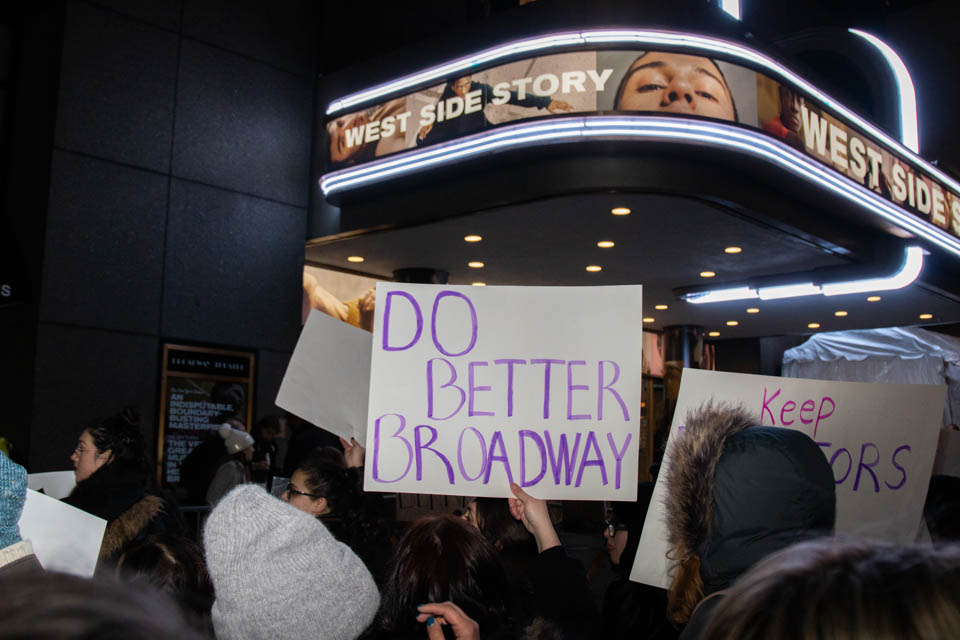 The protestors emphasized that their goal was not to persuade audience members to forfeit their tickets, but rather to help them understand what has happened.

“We don't want to stop people from seeing the show, but I think it's important to be aware of what you're supporting directly or indirectly ... then hopefully it will make them see the show a little differently,” protestor, activist, and New York actor Kelley Heyer said.

To Waterbury’s surprise, though, one audience member decided not to see the show after hearing about the reasons for the protest.

“Tonight was the first person that I knew of who made a point to not go. She said, ‘Me and my brother have tickets, but as soon as you guys explained this to us, I texted him saying I’m not going, you can go.’ But she left. She refused to go inside,” Waterbury said.

Waterbury, a member of both the Columbia Ballet Collaborative and Columbia Repertory Ballet, has found support in the Columbia dance community in the face of challenges. When the news was first released, CBC issued a statement in support of Waterbury and scheduled a meeting with students to discuss official policies. Many of Waterbury’s professors also reached out to her and expressed their support.

Waterbury also noted that her story has had a ripple effect across the globe, resonating with ballet companies nationally and internationally. According to her, a San Francisco ballet company held a sexual respect meeting, intending to make dancers aware of how to handle issues of sexual harassment in the workplace.

While the young performer’s efforts have not yet compelled the “West Side Story” team to action, Waterbury and her supporters refuse to back down. For them, this movement has only just begun. Her efforts have also inspired people to speak up about their own experiences with sexual harassment in the theater industry.

“There was an Instagram account that exposed some dance teacher at a commercial dance studio here in the city—that was a bunch of anonymous people saying, ‘This happened to me, he did this,’” she said. "I think people are warming up to the idea of [sharing their stories], but the circumstances make it really hard for most.”